What does it Mean When Your Ears are Ringing? 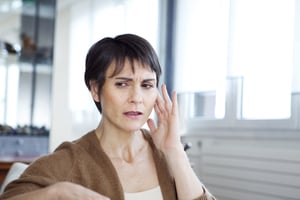 Ringing in the ears, or tinnitus, is something everyone has experienced at some point, to varying degrees.  In addition to ringing, it may sound like buzzing, roaring, or hissing.  It’s your ears’ way of letting you know that something is off, and determining the underlying source can help you protect the health of your ears and hearing in the long-term.  Here are some of the most common reasons that tinnitus occurs:

Whether machinery at work or the thumping bass of speakers at full blast, high decibel noises are among the most common threats to our hearing.  In fact, the National Institute on Deafness and other Communication Disorders reports that noise-induced hearing loss affects up to 24 percent of American adults under the age of 70.  This is most likely to occur over time and with repeated exposure to noises above 85 decibels (about the volume level of heavy city traffic).  So, if you find your ears ringing after a concert or cutting the grass, take it for what it is: a signal to turn down the volume or reach for some ear protection.

A concussion is a traumatic brain injury (TBI) that occurs following a blow to the head.  It is often associated with confusion, grogginess, and nausea; however, tinnitus is another potential symptom accompanying concussions.  The symptoms from which TBI patients suffer and to what degree can vary greatly from one individual to the next.  The development of side effects such as tinnitus may be acute or delayed, and they could resolve in a matter of days or become chronic and last for years.

Certain medications, many of them being quite common, are known to produce, or worsen, ringing in the ears.  These can include certain types of antidepressants, antibiotics (particularly those ending in “-mycin”), and aspirin when taken in very large doses over an extended period of time.  Some lesser known drugs that may also lead to tinnitus include diuretics, antimalarial drugs, and certain cancer medications.

Tinnitus from an Underlying Medical Condition

Finally, there are a number of health conditions for which tinnitus is a known side effect.  Everything from diabetes to hypertension and even allergies are capable of causing that infuriating ringing, along with a few conditions that are specific to the ear itself.  These may include the presence of a non-cancerous tumor known as an acoustic neuroma, Meniere’s disease, or a hereditary condition called otosclerosis in which abnormal bone growth in the middle ear.

The brief and passing sensation of a ringing, buzzing, or hissing sound may not be cause for alarm.  However, in cases where the sound continues to intensify or simply won’t go away, further medical investigation is warranted.  Schedule an appointment with an audiologist such as Dr. Heather O’Laughlin of Lane Audiology Clinic, in order to learn more about your tinnitus and its potential source.