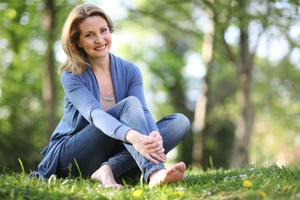 A woman’s reproductive health undergoes many changes over the course of her lifetime. From the first menstrual period, through the childbearing years, and all the way to menopause and beyond, hormones are undergoing major shifts, making each stage distinct. Overall, the cycle of women’s health can be broken down into four main stages.

Perimenopause is a transitional stage between pre-menopause and menopause. This stage typically begins in a woman’s 40s and lasts for several years. During this time, the results of hormonal shifts will become noticeable as the ovaries slowly stop working. As estrogen production slows and fewer eggs are released, common perimenopause symptoms such as the following often occur:

While fertility is reduced and reproduction less likely, a woman can still become pregnant during perimenopause.

Menopause can affect women ranging from their 30s to their 60s. However, the average age of menopause onset in American women is 51. To be considered in menopause, a woman must hot have had a menstrual cycle for 12 consecutive months. The ovaries have stopped working entirely and are no longer releasing eggs.

For menopausal women, hot flashes are the most common complaint. In addition, these hot flashes may be accompanied by an increased heart rate. Women may also notice decreased breast fullness, thinner hair, increased growth of facial hair, or urinary incontinence as the pelvic floor becomes more relaxed.

Once a woman has surpassed a full year without a menstrual cycle, she is considered to be postmenopausal. She will remain in this stage for the rest of her life. Fortunately, during this time, the symptoms that marked the perimenopause and menopause years begin to subside, leaving most women more physically comfortable. However, due to decreased estrogen, the risk for health conditions such as osteoporosis and heart disease increases during this time. For women who have reached the postmenopausal stage of life, a healthy lifestyle and hormone replacement therapy can be key to keeping hormone-related complications at bay.

Women experiencing the life changes of menopause in the Greater Baton Rouge area have the advantage of receiving experienced healthcare at Lane OB/GYN. To get started with any one of our highly qualified physicians, click the button below.