CONGRATULATIONS to Kim Watson for being named Lane’s August MVP of the Month!

Kim is an RN and works in the Emergency Department. She has been with Lane for 16 years and has worked on multiple units.

She was nominated by a co-worker who witnessed her make an impact on a patient who had been discharged. The patient sat in the lobby for hours after he was discharged waiting for someone to pick him up. Her nominating card stated, “Humanity was restored for me when I witnessed one of our employees, Kim Watson, offer a selfless act of kindness to this gentleman. He did not ask her for anything, but she took it upon herself to go get him something to eat from the cafeteria and visited with him. She made sure he knew he was not alone….even though he was no longer a patient. It warmed my heart to see such a random act of kindness. What a great example of a nurse and employee she is.” 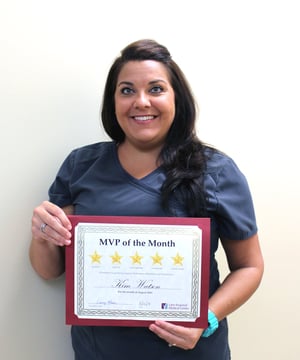