Stomach Flu or Influenza?: How to Tell the Difference 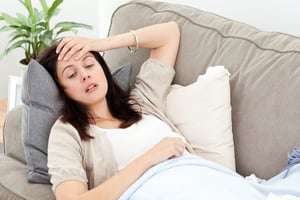 Influenza outbreaks are occurring at higher than normal rates across the country, including Louisiana.  With urgent care waiting rooms brimming with fevers and coughs, it’s easy to wonder if any symptom you observe may be indicative of the flu, including stomach upset.  While there is often confusion regarding the influenza virus and what is often referred to as the “stomach flu,” it is important to remember the key differences between these two illnesses, particularly when the flu is so prevalent.

The condition that is commonly referred to as the stomach flu is actually a form of gastroenteritis.  With the illness, inflammation and irritation of the intestines and stomach occurs as the result of bacterial infection from salmonella or E. coli, a viral infection from norovirus, rotavirus, or adenovirus, parasitic infection, or reaction to food.  When it strikes, gastroenteritis can produce cramps, nausea, vomiting and diarrhea, along with more classic flu symptoms such as fever and headache.

Distinguishing Between Influenza and Stomach Flu

The flu comes on suddenly, attacking the respiratory system and causing fever, headache, congestion, fatigue, and muscle aches.  It is caused by the influenza virus and is impervious to treatment with antibiotics.  Conversely, the stomach flu may also cause some of these same symptoms but is primarily noted for causing gastrointestinal distress.  Unlike influenza, the stomach flu may be the result of a bacterial infection and could respond to antibiotic treatment.

The stomach flu, or gastroenteritis, can result from many different sources: bacterial, viral, parasitic, bacterial toxins, and more.  The flu, on the other hand, comes from one of three forms of the influenza virus: A, B, or C.  Each of these forms can mutate into new strains, meaning that the virus can change from one season to the next and patients can never develop complete immunity.  This is why annual flu shots are important.

Similarities Between Influenza and Stomach Flu

Despite their different causes, types, and treatment methods, there are some similarities between influenza and the stomach flu, primarily in how they may be prevented.  In order to avoid either illness, it is imperative to be careful about the spread of germs through handwashing, keeping surfaces clean, and avoiding exposure to those who are ill.  Additionally, some cases of the stomach flu can be prevented through proper food preparation and storage.

Next time you think you may have the flu, keep in mind the differences between influenza and the stomach flu.  Accurately describing your symptoms and understanding exactly which illness is at play can help you better treat it and recover.  If your symptoms are consistent with the stomach flu, seek treatment from a gastroenterologist at your earliest convenience.