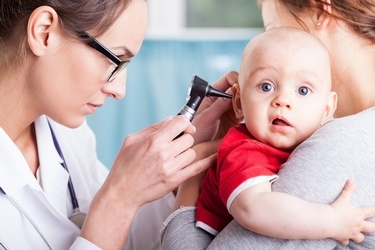 If there’s anything a parent knows, it is the unparalleled ability of a young child to keep you in doctor’s offices.  By the time the toddler years have gone by, you are on a first name basis with the nursing staff, have your doctor’s number stored for quick reference, and know the layout of your pediatrician’s office better than your own home.  And while children come down with an astoundingly wide variety of ailments throughout their youth, there are few they seem as susceptible to as those affecting the ears, nose, or throat.  So common are these conditions that February has been named Kids ENT Health Month.

Naturally, most will deal with a sore throat or runny nose, but the most common reason for prescribed antibiotics among children is neither of these.  Instead, ear infections, or more specifically, inner ear infections (otitis media), take the prize.  You’ve likely encountered an ear infection or two yourself.  At the very least you know someone whose child always seems to have them.  So, let’s shine some light on this all too common childhood ailment.

The middle ear is connected to the upper throat and back portion of the nasal cavity via a canal known as the Eustachian tube.  In children, this tube is shorter and more angled than it is in adults, making it ideal for trapping the bacteria that often results from an upper respiratory infection.  Unable to drain properly, the middle ear becomes infected, leading to a number of symptoms such as:

Additionally, because ear infections are most often accompanied by a preceding illness, typical cold symptoms such as a sore throat or runny nose may also be taken as potential signs of an ear infection.

In most cases of ear infection, the first-line treatment of choice is a round of Amoxicillin.  Typically, a week on the antibiotic is enough to do the trick.  However, in the case of more stubborn ear infections, alternate or stronger antibiotics may be needed.  Whatever is prescribed, it’s important to make sure that your child takes their full course of treatment as recommended.  He or she will likely feel better after a couple of doses, but stopping the medication too soon could allow the infection to return.

While at home, you can increase your child’s comfort through the use of over-the-counter pain relievers such as Tylenol or ibuprofen, warm compresses, or the use of prescription anesthetic ear drops.

In the case of recurrent ear infections, your pediatrician may refer you to an ENT to discuss the possibility of tubes.  These small tubes are placed in the ear under general anesthesia and allow fluid to drain more effectively.  In most cases, the incidence of ear infections decreases greatly after surgery, and hearing may improve as well.

If chronic ear infections are affecting your child’s health or hearing, contact Lane for an appointment with one of our ENT specialists.