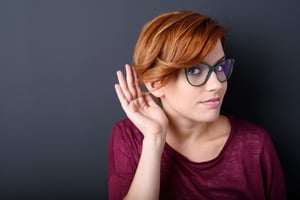 For some, it’s a noticeable difference immediately upon waking.  For others, it occurs rapidly over a course of hours or one or two days.  However it manifests, sudden sensorineural hearing loss (SSHL), or sudden deafness, is a condition that takes thousands of Americans by surprise each year.

A sudden and drastic drop in hearing can be disconcerting to say the least.  It’s frightening, confusing, and although about half of patients will recover some, if not all, of their hearing, half will not.  Prompt medical attention and ongoing treatment are necessary in the effort to identify an underlying cause, as well as the most effective treatment option.  While the precise factors leading to SSHL are identified in only 10 to 15 percent of patients, the following three sources are among the most common:

Sudden Deafness Due to Viral Infection

Findings of many research studies seems to indicate that viral infections could play a large role in the development of SSHL.  While the exact types of viruses are unknown, scientists do know that evidence of viral infections have been identified in many with damaging inflammation to the auditory nerve and inner ear.  Generally, other symptoms of a virus such as fever or muscle cramping are not observed.  However, signs of an upper respiratory infection may occasionally be seen before the onset of sudden deafness.

The means by which sound travels through the ear is an intricate process involving many separate parts.  After traveling through the ear canal and striking the eardrum, sound waves produce vibrations that move throughout fluid-filled spaces, separated by the membranes of the inner ear, or cochlea.  In order for proper auditory function, it is important that the membranes maintain each area of fluid in its rightful place.  However, a tear within the membranes can lead to mixing of these inner ear fluids and result in the loss of nerve impulses needed to hear.

On occasion, sudden deafness can be attributed to abnormal blood flow to the inner ear.  Conditions such as hypertension or arteriosclerosis (thickening and hardening of artery walls) may result in complications such as bleeding in the cochlea or inadequate blood flow.  These conditions are most commonly seen in elderly patients.  However, female patients who are taking birth control could also develop these blood flow abnormalities.

While the list of potential causes of sudden deafness is much longer, these three reasons represent some of the most commonly identified and most likely.  Although the experience of sudden hearing loss can be quite frightening, seeking expert care is the most important step in the journey to hearing recovery and one that should be taken quickly.

If you are experiencing the signs of SSHL, contact Lane Audiology Clinic at (225) 658-4154, and request an appointment for diagnostic testing as soon as possible.  Dr. Heather O’Laughlin, our resident audiologist will help identify the most likely causes behind your condition as well as the medications, procedures, or devices that are most likely to help.