Getting to the Source of GERD with an Upper GI Endoscopy 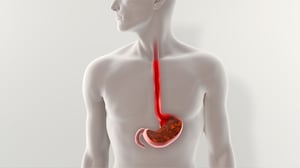 The gastrointestinal tract is an intricate series of organs that takes food through the entire digestive process, from eating to excrement.  Along the tract are the mouth, esophagus, stomach, small and large intestines, and the anus, and health complications can arise in any of them.  For instance, we have all experienced stomach upset from time to time, and most are aware that colonoscopies are needed with age to help detect colorectal cancer.  However, there are other “scope” procedures which may be needed to help assess and diagnose digestive troubles.

What is an Upper GI Endoscopy?

An upper GI endoscopy, also simply called endoscopy, is a procedure using a long flexible tube with a camera and light to visualize the upper gastrointestinal tract, including the esophagus, stomach, and upper intestine. It can help doctors identify problems within these areas such as inflammation, bleeding, tumors, or ulcers.  Because endoscopy allows physicians to get an inside look at the upper GI tract, it is often preferable to other imaging tests such as x-rays.  Furthermore, when observations of any abnormalities are made, biopsies of the tissue may be taken at the same time for further examination and diagnosis.

How is an Endoscopy used for GERD?

GERD, or gastroesophageal reflux disease, is a condition marked by chronic heartburn. For most patients, the condition can be well-managed through medications, either over-the-counter or prescription.  In these cases, endoscopy is not typically needed.  For others, however, the symptoms of GERD persist or even worsen despite medication, and in these instances, an upper GI endoscopy can be a valuable diagnostic tool.  Additionally, the following criteria may also signal the need for further evaluation of a patient’s condition:

When an endoscopy is performed to evaluate the condition of a patient with GERD, damage to the lower esophagus is sometimes observed.  This condition is known as Barrett’s esophagus.  Previously, it was believed that patients diagnosed with Barrett’s had a significantly higher risk than others for developing esophageal cancer (about 1 in 200).  While those numbers have recently been determined to be much lower (about 1 in 1000), the condition is still known to place sufferers at a higher risk for this rare but dangerous form of cancer.  Due to this risk, it is typically recommended that those with Barrett’s esophagus receive an endoscopy every three to five years or more frequently if more abnormalities begin to be observed.

GERD is simply one example of the many conditions or symptoms that an upper GI endoscopy may be able to monitor and diagnose.  If you are having any troublesome gastrointestinal symptoms that have persisted for days or weeks or that are not improved by medication, contact your physician to learn more about endoscopy and whether or not it may be beneficial for you.