Congratulations to Bernadette Ellis for being named Lane’s November MVP of the Month!!!

Bernadette is a Unit Tech and works in the Emergency Department. She was nominated by a co-worker who observed her going the extra mile and refusing to take no for answer!

Her MVP card stated, “ I watched Bernadette help an older gentleman who came to the hospital to visit a sick friend. As he was leaving the hospital, Bernadette observed him having trouble with his walker. She offered help, but he refused. She offered to get his car for him so he would not have to walk as far. Again he refused. At this point Bernadette could have gone about her business and returned to her regular job responsibilities, but she did not. Instead she walked with the gentleman to his vehicle. She did not rush him, but let him walk at his own pace….allowing him to maintain his independence while assuring he made it to his vehicle in a safe manner. Thank you, Bernadette, for going the extra mile and not taking no for an answer.” 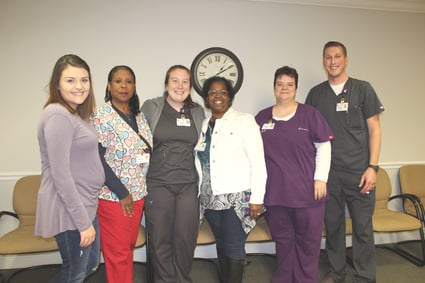